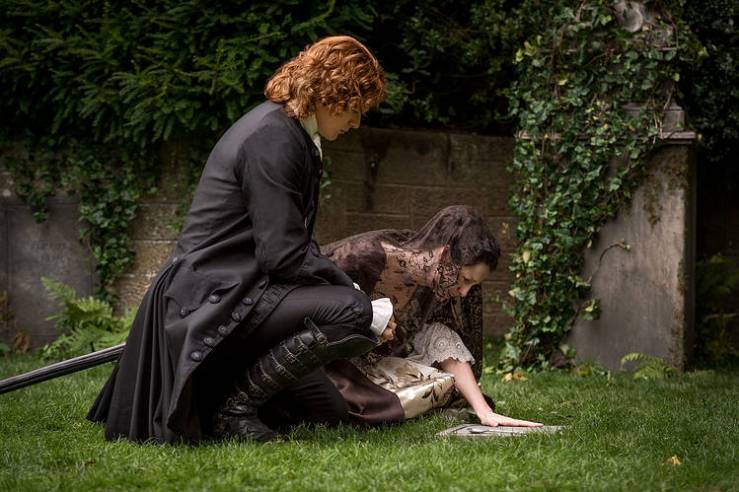 The show begins in Boston, 1954.  Claire’s daughter, Brianna, is looking at a picture book with birds, and she sees a Heron.  She asks Claire if she’s ever seen a Heron before, and Claire tells her that she saw one once in Scotland.  Brianna asks Claire when she went to Scotland, and Claire tells her that she was in Scotland a long time ago.  That’s an understatement.

We cut to 1740’s France, where Claire is going through a difficult and seemingly painful labor at the hospital.  Mother Hildegarde and the doctor/executioner are trying to help as best they can, but to no avail.  When Claire wakes up, she learns that her baby was stillborn.  In shock, Claire tearfully demands to see the baby.  *Sob*  Some time later, Mother Hildegarde lets Claire know that they baptized the baby as Faith, and buried her in the cemetery at the convent (Mother Hildegarde also lets her know that baptizing the baby was illegal since she wasn’t alive, but she wanted her buried in hallow ground).  A priest also comes in so Claire can give her last confession, as she has what’s known as “childbirth fever,” and may not live much longer.  Claire asks for Jamie, but he’s still locked up.

Later that night, Master Raymond sneaks in the hospital, on the run from King Louis, who is indeed out for blood.  He asks what Claire sees, and she answers that she sees wings.  Master Raymond tells her that wings mean healing, and he places his hands on her, taking the infection out of her.  He then reaches inside her, and tells her to call Jamie’s name as he pulls out the placenta, which was gross, but necessary, since that’s what was making her sick in the first place.  They say their goodbyes and the nuns return, thanking God for making Claire well again.  Mother Hildegarde informs Claire that Jamie is going to stay locked up for a while, and if he had killed his opponent, he would’ve been locked up longer even longer.  She goes on to tell Claire that Black Jack was sent back to England to have his pee-pee stitched up.  I swear, Black Jack is proof that evil never dies.  Claire lets it be known that she’ll never forgive Jamie for dueling with Black Jack.

Weeks later, Claire comes home.  Her servants all show their sympathy, namely Fergus, Suzette and Magnus, the butler that took her to the hospital.  Claire thanks Magnus for helping her.  She’s extremely depressed and angry while she’s home, and there’s also something going on with Fergus.  One night, while Claire’s crying in the hall, she hears Fergus having a nightmare.  Claire goes to his room to comfort him, and tries to get him to talk about it.  Fergus confesses that while he and Jamie were at the whorehouse, he snuck into a room to steal some perfume for Claire, and it turns out Black Jack was renting the room.  Once Black Jack caught Fergus in the room, he locked him inside and proceeded to rape him.  When Fergus cried for help, Jamie caught that no good bastard in the act, and the duel was back on.  *Sigh*  So, not only is Black Jack a rapist, but he’s also a damn pedophile.  There is a special place in Hell for that fool.  That’s why you got stabbed in the dick, Dick.

King Louis sees Claire and she asks for Jamie’s release.  Louis agrees…if Claire does something for him.  Claire immediately expects him to break out the Viagra, but instead, he takes her to a strange room.  He lets her know that he would like her to judge two men on trial for witchcraft.  Sure enough, the men on trial are Master Raymond and That French Fucker.  Louis apparently wants Claire to be a judge since she is “Le Dame Blanche” and can see things that normal folks can’t.  Okaaaayyy…  Oh yeah, and the doctor/executioner was there, too.  Claire utters her now famous “Jesus H. Roosevelt Christ” phrase, as she correctly deduces that somebody ’bout to die.  Although Claire does not want either man to die for crimes they did not commit, she can’t resist the urge to screw with St. Germain, and I can’t say I blame her.  She lets it be known that he has darkness within him and tries to get him to admit to Mary’s rape.  TFF denounces her as a witch, and even admits to poisoning her.  Claire says that she is a witch, but a white witch that practices white magic (why does the bad magic have to be black?).  The king lets TFF know that Claire’s not on trial, he is.  Oopsie!  Claire backs off and lets Louis know that all mean have darkness, and Master Raymond’s and St. Germain’s are not different than anyone else’s.

Louis’ still not convinced, and wants a demonstration.  He brings out a snake a la tent revival preachers that are close to my neck of the woods, and says that if the snake kills the men, they were evil all along.  Instead, Claire opts to have the men drink her “poison” to see if it kills them.  Claire gets a bottle of bitter cascara and gives it to Master Raymond first.  He gets sick, but doesn’t die.  Claire passes the same cup to St. Germain, and the white stone on her necklace turns black (remember, that stone changes color when it’s near poison!)!  It turns out Master Raymond used his slight of hand to slip a little poison in that bad boy after he drank it.  Claire resists giving TFF’s evil ass the cup, but Louis insists.  Hey, you can’t say no to the king!  St. Germain starts crying and curses Master Raymond and Claire.  As a matter of fact, he takes a page out of The Exorcist and says that Claire sucks the devil’s cock.  Ass.  He drinks the poison and dies right there on the spot.  Bye, bitch.

Master Raymond is free to leave, but Louis lets it be known that he can never return to France.  Claire is heartbroken to see her friend go.  After the guards drag Master Raymond away, Claire asks Louis if her request to have Jamie released is granted, and he tells her that there’s still a debt to be paid.  He takes her back to his chambers runnin’ (leaving St. Germain’s dead body right there…ha, ha!), and Claire does it with the king…for two seconds.  I mean seriously, Louis pulled down his trousers, thrust inside Claire three times, and was finished.  Worse sex ever, I’m sure.  Shortest, most definitely.  That wasn’t even long enough to even feel guilty about, to be honest.  The king lets Claire know that her request will be fulfilled, and she can leave.

Jamie is released, looking like Santa Claus before his hair turned white, and he asks about the baby.  Claire tells him that Mother Hildegarde actually allowed her to see the baby before she was buried.  Poor Claire held on to little Faith for the rest of the day, until Louise came by the hospital later that night to see her.  Louise convinced her to let the baby go, both literally and figuratively, and once she did, Claire cried her eyes out.  Jamie asks if Claire hated him for what happened, and Claire tells him that she did, but at the same time, she asked Jamie to do the impossible and she put Frank before her family.  Jamie reminds Claire that Frank is her family, too.  Claire asks for forgiveness and Jamie tells her that she’s already forgiven.  Claire also fesses up about her record breaking two second sex with the king, and Jamie immediately forgives her for that as well.  Claire wonders if there’s anyway they can go on, and Jamie tells her they can get through this heartbreak together.  With that being said, Claire tells Jamie she wants to go home…to Scotland.  Jamie agrees, but not before visiting Faith’s grave.  *Sob*

Man…this was the best episode of the season so far, but at the same time, it was also the saddest.  What really made this show sad was that the characters that were victimized blamed themselves for the horrible things that happened.  Like most rape victims, Fergus felt ashamed after being sexually assaulted by Black Jack, and Claire and Jamie each blamed themselves for Faith dying.  Fergus is certainly not to blame for what happened to him, but I also have to say that neither Claire nor should Jamie take responsibility for Faith’s death.  Like Jamie said, Frank is Claire’s family as well, and he shouldn’t have to pay for his great-great grandfather being a complete bastard.  On the other hand, Lord knows Black Jack deserved that ass whuppin’ he took and more.  I still say that Jamie should’ve went full Lorena Bobbitt on him.  I still can’t believe St. Germain aka TFF is gone, but it’s fitting seeing as the Frasers are finally leaving France, praise Jesus.  I’m so happy they’re going back to Scotland.  Paris kind of got on my last nerve.  To say it’s the City of Light, the Frasers’ time there was pretty damn humdrum.  I want the excitement back!  Apparently next week, some shady Jacobite dude is trying to take Lallybroch from Jamie!  You know Jamie ain’t gonna let that shit happen!

So what did y’all think about “Faith”?  Was it the saddest episode of “Outlander” ever?  Are you excited to see Claire and Jamie go back to Scotland, or did you enjoy seeing them in France?  What did you think about St. Germain getting killed ?  And how ’bout that “sex” scene?  Jamie lasted longer on his wedding night than the king did, and keep in mind, Jamie was a virgin!  Did this episode make you cry at all?  Give me your thoughts!