What’s up, ladies and gents?

In case you haven’t heard, Prince is going to be honored at this year’s Billboard Music Awards, and the artist chosen to do the tribute is none other than…Madonna.  Now, when Madonna was picked, the ladies that host “The Talk” discussed the topic.  Sheryl Underwood mentioned that Sheila E. should do the tribute with Madonna.  Makes sense to me.  However, Linda Perry (Sara Gilbert’s wife) was guest hosting the show and had this to say:

“In all fairness, Madonna was asked to do this and she was friends with Prince but you also have to think about it’s really the Billboard Awards, they think about who is hot and popular,” she argued. “They’re not gonna call up Chaka Khan and re-put together The Time and Sheila E. because they’re not relevant right now.”

Wow.  Now, I realize this conversation took place this past Friday (May 20th), and today’s Sunday (May 22nd), and I’m fashionably late to the party.  However, I just received the news feed on my phone this morning, and after seeing all the comments about it over the internet, as well as Sheila E.’s reaction and Linda Perry’s defense of her opinion, I have to put my two cents in.  First of all, I like Linda Perry.  Keeping it 100%, I had to Google her, because her name sounded familiar but I couldn’t remember exactly who she was.  When I looked her up, I saw that she was Sara Gilbert’s significant other, as well as the lead singer of 4 Non Blondes.  I loved their song, “What’s Up?” when I was in sixth grade, and I still love it to this day (as a matter of fact, I was listening to the song while typing this post).  Second of all, I’ve been seeing Madonna get a lot of flack for being chosen to do this tribute.  Why is that?  Madonna is a legend, just like Prince.  A few months ago, she did a mini tribute for Mr. Bowie during one of her concerts, and in my opinion, she killed it.  I must admit I never cared for her duet with Prince (“Love Song”); their voices just didn’t mesh well, and I wasn’t even aware that they dated for a short period of time.  However, Madonna is a good pick for this tribute.  She and Prince have a lot in common:  they both blew up in the 80’s, they were both mainstays on MTV, they both had enormous sex appeal and were seen as sex symbols, and they continued to make great music and evolve as time went on.  Hell, you can argue that Madonna actually is a female version of Prince.  On the other hand, Ms. Perry saying that Madonna is better suited to do a tribute than Shelia E. because the latter is “irrelevant,” is dead wrong. 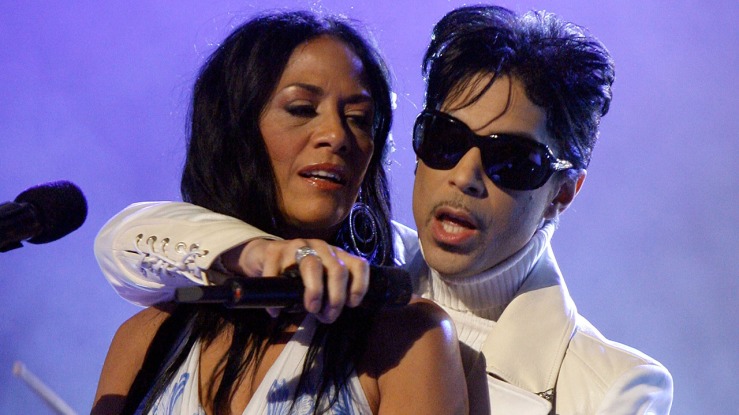 As LL Cool J once said, “there’s a flip side to every coin,” and there’s definitely a flip side to this one.  Yes, Madonna would do a great Prince tribute.  But in all honesty, when Prince passed, and I thought of people that would honor him on stage or an awards show, Sheila E. and The Time were the first people to come to mind.  Sheila E. is not irrelevant at all.  She’s a legend in her own right.  With her iconic albums The Glamorous Life and Romance 1600, her role in Krush Groove (one of my favorite films growing up), and her impeccable percussion skills, this lady is a doggone force of nature.  Considering that her father is Pete Escovedo, the former drummer of Santana, she was actually born from music royalty.  Not only that, but Sheila E. and Prince were basically the equivalent of Biggie Smalls and Puffy, or even Johnny Cash and June Carter.  They met each other in 1978, and were even engaged for a while.  After they broke up, they remained friends and were close until Prince’s death.  They maintained their working relationship as well, and continued to perform together in multiple shows.  Linda’s comments about The Time and Chaka Khan were wrong as two left shoes, too.  Prince helped create The Time, and he and Morris Day basically grew up together.  As for Chaka Khan…I’m just baffled.  Who would think that she’s irrelevant?  She’s basically a model for all popular female artists today.  Just last night, I was listening to a radio show that airs a segment called, “Battle of the Old School.”  The “battle” had Chaka Khan vs. Anita Baker vs. Whitney Houston.  Chaka lost the battle by a mere three or four points (Anita won).  I thought for sure she was gonna go home with the gold.

Saying Sheila E. is not relevant was pretty disrespectful to her as well as to Prince’s memory, considering how much she meant to him.  Madonna shouldn’t be catchin’ all the hell she’s getting (y’all should see some of the comments made about poor Madge), but truth be told, it’d be nice to see her and Sheila E. honoring Prince.  And yes, The Time and Chaka Khan should be there, too.  I wouldn’t even mind seeing Carmen Electra and Apollonia, or Sheena Easton, for that matter.  They all meant something in Prince’s life; something more than who’s popular right now, and who’s making the most bank.  Linda Perry ought to watch her words…someone could just as easily say the same thing about her.  Like I said, I respect her and her work, but truth be told, “What’s Up?” came out when I was an 11 year old girl contemplating life after elementary school.  I’m a 34 year old woman now.  Considering that her last (and arguably only) big hit was 23 years ago, does that make her irrelevant by her standards?

So what do y’all think about this situation?  Should Madonna do Prince’s tribute, or should it go to Sheila E. and the other artists he’s known for working with?  Do you think Linda Perry is wrong or do you agree with her?  Who would you like to see do a Prince tribute?  Give me your thoughts?