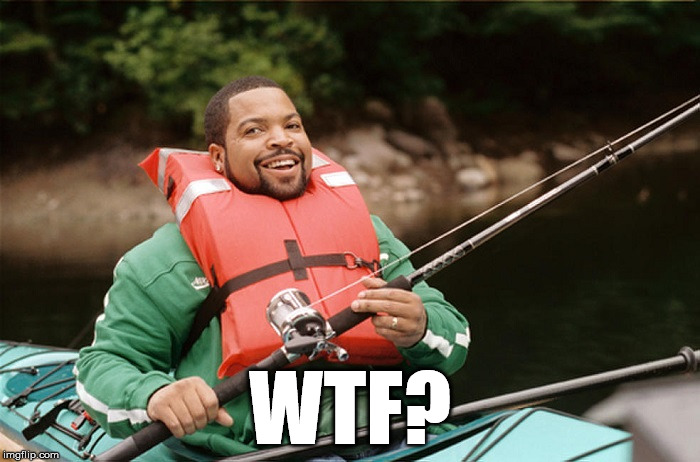 This WTF Ice Cube pic was meant to be ironic.

Okay, y’all.  Here’s the last installment of the WTF moments of 2017 (and most of the good moments are in this post)!  Enjoy!

Jay-Z Releases 4:44…and Promptly Gets Stung By the Beyhive

On June 30, 2017, Jay-Z released his critically acclaimed 4:44 album.  I’ve heard most of the tracks on the album, and I can say with all honesty that it’s pure fire.  As I stated earlier, the album was praised by critics and fans alike and has received numerous accolades, including at least three Grammy nominations.  However, there were some people that didn’t appreciate the album so much…the Beyhive.

As some of y’all may remember, I reviewed Beyoncé’s Lemonade album last year.  When it came down to the subject of infidelity on the record, I stated that there was a 50/50 chance that was Bey was speaking on happened in real life, or it could be just a topic she wanted to explore.  Well, when Jigga released 4:44, he confirmed on the title track, and the songs “Kill Jay-Z” and “Family Feud” that everything Beyoncé spoke about in Lemonade was true.  He really did cheat on her.  Some have even considered 4:44 to be a companion piece to Lemonade.  That really pissed the Beyhive off.  The minute they learned that Jigga was unfaithful to Beyoncé for the majority of their relationship (apparently he didn’t stop cheating on her until Blue Ivy was born), they went in.  For nearly the entire afternoon on June 30th, the Beyhive dragged Jigga by the lips.  It was damn brutal.

They even started analyzing Beyoncé’s old tracks and stating that they were symbolic of all the pain she was going through (“Ring the Alarm” was one of the ones they mentioned if I remember correctly).  One Beyhive member even mentioned the song “All I Could Do Was Cry” as being representative of Beyoncé’s anguish.  I wanted to tell her that “All I Could Do Was Cry” was actually an Etta James cover Bey did for the film Cadillac Records, but my better judgment kicked in, and I left the subject alone (another fellow Beyhive member corrected her later).  The dust settled by the next day, and today, everyone’s psyched about the release of Jigga’s “Family Feud” video, namely because Bey and Blue Ivy are featured in it.

If there was one person that had a good doggone year this year, it was Lisa Bloom.  Before 2017, I didn’t know much about Lisa.  I had only really heard about her famous mother, Gloria Allred (who’s also an attorney).  That all changed this year, Lord knows.  She represented damn near everyone:  Kathy Griffin, Quantasia Sharpton (one of Usher’s accusers; see Part 2 to learn more about her), Melissa Meeks (Jeremy Meeks’s aka “Felon Bae’s” ex-wife), Montia Sabbag (the woman caught with Kevin Hart), Blac Chyna and even Harvey Weinstein, who she later dropped as a client.  Good Lord!  Can’t say this lady isn’t makin’ her money!

Here’s another good WTF moment for 2017.  My very first post for the year (and for the longest time, the only post I had) was about how much I loved The New Edition Story.  I figured the movie would be good when I first heard about it, but when I actually watched it, I was blown away.  Viewing this miniseries the first of the year and noting how it gave BET its prestige back, let me know that 2017 was certainly starting off on the right foot (at least in respect to entertainment), aside from all the Chris Brown/Soulja Boy drama (that’s explained in Part 1).  Y’all can read my review for my in-depth analysis, but I’ll say that if you haven’t seen this film, or you’re one of the young millennials that don’t really know much about New Edition, you definitely wanna check this gem out.

Note:  I found out after writing my review for The New Edition Story that the altercation the boys had with Kurtis Blow was fabricated for entertainment purposes.  Sorry, Kurt!

Get Out Is One of the Biggest Blockbusters of the Year

The night I went to see Get Out, I decided to make a mother-daughter day of it, and let’s just say that everything went wrong…horribly wrong.  By the time we got to the theatre, I was physically and emotionally drained.  Then the film started, and my mood lifted.  Get Out was one of the most thought-provoking horror-comedy/thrillers I’ve ever seen, and I knew that all the hype the movie was getting was well deserved.

I was interested in seeing this film from the get go.  I remember my former editor tasking us to write a review about the teaser trailer circa Dec. 2016, but apparently, he was told to inform us “not to mention race in the review.”  After viewing the trailer, that request seemed asinine then, and it seems even more asinine now.  The entire movie revolves around race, with wealthy, yet aging white people having their consciousness placed in young black people because they buy into stereotypes of us being faster, stronger and more virile.  The theme struck a chord with a lot of people, black and white alike, and became a blockbuster film, as well as the most talked about movie of 2017, arguably.

What was even more shocking is that the film was directed and written by Jordan Peele, who we never even figured would make a movie this deep, given his strictly comedic background.  The easter eggs and symbolism in Get Out has been discussed so much, that Jordan even made a video breaking down the fan theories.  Not only that, but the film has made its way into the pop culture lexicon.  “The sunken place” is now the go-to phrase whenever describing the space some black folks seem to be in whenever they disrespect the culture.  I was so glad to see this movie get the love it deserves.  If you haven’t seen Get Out yet, you must’ve been sittin’ under a rock.  Get out and see it.  **Bad pun**

Before Jigga got drug by his lips for admittedly disrespecting his wife for years on end, the Beyhive rejoiced circa Feb. 2017 when Beyonce first announced that she was pregnant again, this time with twins.  Needless to say, when the now legendary Instagram post with Bey’s baby bump was first uploaded, the whole internet went ape.  For the next few months, all anyone could talk about was Beyoncé’s twins.  Would they be two girls, two boys or a girl and a boy?  If they were two girls, did that mean that they would team up with Blue and become a new generation of Destiny’s Child?  What would be the twins’ names?  On and on it went.  Then, sometime in June, Beyoncé had her babies. 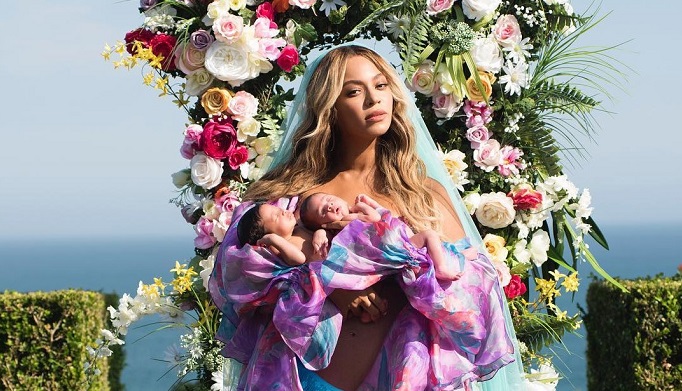 The internet started going even more ape, begging to see photos of the twins and to learn their names.  Some of them even fawned over the fact that Bey had the twins in June, making them Geminis.  A few weeks later, Queen Bey posted her second legendary photo of herself and the babies and made their names public:  Sir and Rumi.  Personally, I would’ve gone another route, but these are Beyoncé’s kids; she can name them whatever she wants to.  Of course, whenever the media gets a glimpse of the babies, to this very day, everyone loses their shit.  That’s fine, though.  Bey seems happy and it looks like she and Jigga have worked things out, making their family stronger than ever.  Congrats to Beyoncé.

Harvey Weinstein and the #MeToo Movement

For decades, Harvey Weinstein was considered one of the top film producers in the movie industry.  Weinstein was once the co-owner of the now-defunct Miramax Films and the current owner of The Weinstein Company, and he worked with industry legends such as Quentin Tarantino, Peter Jackson, and Robert Rodriguez.  However, Weinstein’s good name and prestige became irreparably damaged circa fall 2017.  Around that time, A-list actresses such as Gwyneth Paltrow, Asia Argento, Rose McGowan, and Ashley Judd alleged that they had all suffered some type of sexual harassment and/or assault from Weinstein.  Despite being a well-respected producer, rumors about Weinstein’s proclivities towards sexual misconduct had been going around Hollywood for years, but they were written off as just baseless lies or bad jokes.  When the victimized women came forward, people began to see the truth in the what they were saying, and Weinstein’s misdeeds became public knowledge in a major way.

Over time, nearly 82 women stated that Weinstein had either raped or sexually harassed them.  There was even an audio tape released of Weinstein aggressively coaxing Italian model Ambra Gutierrez to come to his hotel room.  After the women told their stories, the floodgates opened.  More victims, men and women, shed light on their own sexual assaults, but their own stories weren’t against Harvey Weinstein…they were against other big players in Hollywood.  Names of alleged rapists/sexual harassers have included Dustin Hoffman, Richard Dreyfuss, Charlie Sheen, Kevin Spacey, Louis C.K., Brett Ratner, Jeremy Piven, and Ben Affleck, just to name a few.  Other men outside of Hollywood were also accused of sexual assault such as Tavis Smiley, Warren Sapp, Charlie Rose, Russell Simmons and Matt Lauer.  The victims vary in gender and race, and they have ranged from Angelina Jolie to Terry Crews.  Corey Feldman, who’s been calling out Hollywood’s pedophilia for years and has admitted to being a victim himself, has recently decided to make a film exposing other industry people that have molested and raped young children.  Ironically enough, the interview Corey had about his upcoming film (which was the very one I linked) was with none other than Matt Lauer.

These admissions of being victimized have given power to the #MeToo movement, a crusade first started by Tarana Burke in 2006.  After Alyssa Milano encouraged other victims to say the phrase on Twitter, the campaign grew in size and reputation.  The silence breakers in the #MeToo movement were voted Time magazine’s 2017 Person of the Year.  More victims have made their stories public, no longer afraid of the ramifications of speaking up about the abuse they’ve endured.

Okay, y’all.  That was the last part of my WTF series!  What did you consider the biggest WTF moment of 2017; good or bad?  Did you agree with any of the things I mentioned?  Would you add anything else?  Let me know in the comments section!