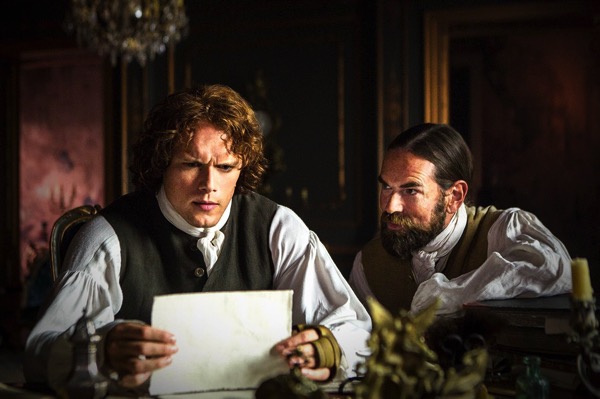 So…the Frasers are still in Paris, but the couple isn’t having too much fun in the City of Light.  Jamie spends his days and nights rubbing elbows with Monsieur Duvernay and the crazy ass “Bonny” Prince Charles trying to bring down the Rebellion, whereas Claire spends her days and nights not doing a damn thing but sitting around the house and joining in the occasional card game with Louise de la Tour and timid Mary Hawkins.  Although Jamie’s life is busy, he hates what he’s doing, and Claire can’t stand being reduced to a socialite.  The only one having a blast is Murtagh, and that’s because he’s started participating in extracurricular activities with the maid.  Murtagh cracks me up this season!

To make matters worse for the Frasers, Jamie soon learns that the prince actually has an unknown financial backer to fund his war, and although Jamie previously convinced Monsieur Duvernay to talk the Prince out of the Rebellion, crazy ass Charles gave him an even sweeter deal:  an alliance between Britain and France in exchange for King Louis’ financial assistance.  If that’s not bad enough, Claire finally pieces together why Mary Hawkins’ name is so familiar to her…she’s Frank’s great-great grandmother, soon to be married to none other than Black Jack Randall (who’s still alive, by the way.  Evil never dies).  Claire realizes that Black Jack can’t be killed, because if he is, Frank will cease to exist.  If you wanna get even deeper than that, if Frank vanishes from existence, Claire will also vanish from the 1700’s, since she’ll never have a reason to go to Scotland on her second honeymoon and visit the stones of Craigh Na Dun.  I know, I just gave y’all a serious nerd moment.

Claire lets Murtagh know that Black Jack is still alive (naturally, she leaves out the second part about killing him and destroying the space-time continuum as they know it), and Murtagh advises that she not tell Jamie, as it will take his mind off what they’re doing and have him only focused on revenge.  In the meantime, Claire decides to do more while she’s in France.  Thanks to her apothecary buddy (whose name I still can’t remember!), she learns that the charity hospital in town is always looking for volunteers, and the services of a healer would be much appreciated.  Claire jumps on the opportunity and quickly finds herself in her element.  She diagnoses patients, tends to wounds, she even tasted some urine to deduce what was ailing a sick woman (yes, you read that right.  She tasted pee).  Jamie wasn’t too happy to hear about Claire becoming Florence Nightingale.  Not only was she not home when he needed her to be, but he believes being around all those sick people (and tasting their pee) will hurt the baby.  They get into a big argument—even Murtagh gets in trouble for taking her down there (Murtagh’s reaction had me rollin’!)—and Jamie storms out the house.  Booooooo.

While Jamie’s drowning his sorrows in a nearby tavern, he encounters a young pickpocket ripping all the patrons off (he even managed to steal Jamie’s beloved snake sculpture a few nights earlier.  You have to watch the first season to learn the significance of that wooden figurine).  Jamie chases him down and puts the kid in his employ, having him steal letters from crazy ass Charles so he and Murtagh can decipher the coded messages.  He pretty much adopts the kid.  Jamie moves him into their house and renames him “Fergus” because his real name “wasn’t manly enough.”  Claire isn’t too keen on the new living situation, but she praises Jamie for his idea.  That’s about all she’s willing to say to him though, considering they’re not exactly on speaking terms.

For the next few days, Fergus steals letters for Jamie, who in turn attempts to crack the codes with Murtagh.  Claire continues her work at the charity hospital.  One day, Fergus retrieves a letter that is actually a musical composition.  Jamie correctly deduces that it’s actually a coded message, so he begrudgingly visits Claire at the hospital to have her boss, Mother Hildegarde, decipher the meaning.  The sheet music is a German composition, and since Mother Hildegarde is indeed German, Jamie figures she’s the best lady for the job.  She notes (no pun intended) that the piece is taken from one of Bach’s works (and she knows Bach personally!) but the key is constantly changing.  Later that night, Jamie and Claire figure out that the key changes are what’s needed to decode the actual letter.  They soon learn it’s a message from the Duke of Sandringham himself, stating that he’s gathered all the funds they need.  Jamie is happier than he’s been in weeks, and he breaks out the good alcohol to celebrate.  Little does he realize, the second he meets up with the Duke, he’ll learn that Black Jack is actually alive (remember Black Jack’s baby bro works for the Duke).  Murtagh begs Claire to tell Jamie, but she remains tight lipped, not wanting to spoil Jamie’s moment in the sun.  DUN-DUN-DUUUUUNNNNNN!

I have to say, this episode was dull as dishwater.  I’m ready for the Frasers to return to their beloved Scotland, because France isn’t delivering the goods like I thought it would.  Nothing exciting is happening.  I can see why Claire and Jamie are dissatisfied with their new lives; their new lives are beginning to dissatisfy us!  All they have are conversations over games of chess, conversations in brothels, conversations at parties…long, boring drawn out conversations.  “Madame Secretary” brings more fire than this season of “Outlander,” and that’s an actual political drama.  I want the heat, drama and romance as well as the political aspects to come back.  Claire working in the hospital gave a small taste of what we’ve come to love about the show, but it’s still a pale version of what the series once was.  Then, when there’s an opportunity for something interesting to happen, it’s over all too soon!  TFF made an appearance this week (to learn what that means, see my last week’s “Outlander” review), but it lasted all of five seconds, and hardly any words were exchanged between him and Claire.  I will say that the apothecary seemed a bit chummy with TFF, although he let it be known last week that he considers the Comte an enemy as well.  Claire called him on it, and I hope we get more insight into their relationship as well as the Comte’s conflict with the Frasers.  Next week, Claire and Jamie host a huge dinner with Monsieur Duvernay and the Duke of Sandringham in attendance, which I’m sure will bring about more boring political mumbo jumbo, but Jamie apparently gets pissed off and starts whuppin’ someone’s ass halfway through the episode.  My mom was psyched to see a fight actually break out, and to honest, so am I.  I’m ready to kill to see some real action and excitement happen this season.  Step it up, y’all.  Bring back the “Outlander” that made us all fans in the first place.

So what did y’all think about “Useful Occupations and Deceptions”?  Did it have you biting your fingernails or was it so boring you could hear your hair grow?  Give me your thoughts, please!

1 thought on ““Useful Occupations and Deceptions” – Recap and Review”