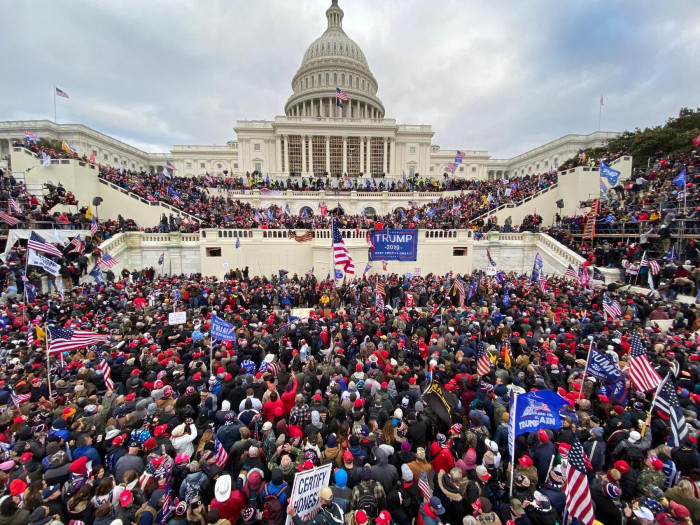 “Is this the real life?”

I won’t finish that line, because what’s been happening in my country lately damn sure ain’t fantasy. If anything, it’s nightmarish. I feel like somehow I entered The Twilight Zone in early 2020 and can’t get out. I had hope that 2021 would be better—and seeing as we’re only two weeks in, I’m still holding out hope—but the new year couldn’t resist showing its ass.

As I’m sure you all are aware, President Trump refused to concede his loss in the 2020 Election or accept President-Elect Joe Biden’s victory, claiming “he won by a landslide” and citing election fraud as the culprit for Biden clinching the vote.

On Jan. 6, 2021, Congress was scheduled to verify the electoral votes. That same day, Trump held a rally and publicly suggested that he and his supporters “walk to the Capitol and give the ‘weak’ Republicans the pride and boldness they need to [take their country back].”

Now there’s some people out there that dispute that Trump never told his constituents to storm the Capitol and/or start a riot, and I’ll give them that. Those exact words didn’t come out of his mouth, and it’s true that he mentioned marching to the Capitol peacefully. However, after serving as Commander-In-Chief for four years, he should know by now how extreme some of his supporters can be, to put it mildly. During this last election, some Trump supporters took their already radical advocacy to a whole ‘nother level.

With all this being said, Trump had to have known that the people he rallied together weren’t going to have a peaceful march on Pennsylvania Ave., especially after he used other little buzzwords and phrases like, “take our country back” and “stop the steal.” This is the equivalent of Beyoncé asking the Beyhive—or Nicki Minaj asking the Barbs—to join them on a march to a dude’s house that talked trash about them on social media. No disrespect to the Beyhive or the Barbs, but you know there’s some members of those fandoms that are willing to go hard…hard enough to actually visit the dude’s house and do more than just talk. Even if you don’t want to accuse Trump of inciting what immediately followed his rally, at the very least, you have to admit that he’s guilty of sedition.

What happened next isn’t surprising. Writer/political analyst Arieh Kovler even called it:

And sure enough, the Trump supporters committed what can only be described as a coup d’etat, and invaded the US Capitol building.

If I didn’t know any better, I’d swear this was a scene from Mr. Robot.

Some folks are arguing that these fools only wanted to protest, but according to the news report below, a lot of the insurgents had much more sinister objectives in mind:

I’m still trippin’ off the fact that these people were even able to enter the building. When Black Lives Matter protested in Washington, DC this past summer, those guards were stationed in front of the Lincoln Memorial were fired up and ready to go. Truth be told, the memorial was previously vandalized, but those jokers looked like they were protecting it from The Terminator’s daddy!

However, the attitudes of some of the Capitol police officers during this particular “protest” (as well as the manpower stationed around the building) were completely different:

Five people died as a result of this insurrection, one of which was a Capitol police officer. I have to say though, if it were a group of black protestors, I’m sure the death toll would be a lot higher.

Trump later acknowledged these rioters by releasing a statement. Here’s what he had to say:

Funny…his words for NFL players that chose to kneel during The National Anthem were a lot more harsh:

And don’t get all in my face about it “not being a race issue” and “there’s no such thing as white privilege.” I call bullshit. These idiots were not only allowed into the Capitol building by members of the police force, but they were allowed to go home and were pursued after they stormed the building. I’m sure if they were black rioters, they would’ve been arrested on sight (actually, they probably wouldn’t have made it to the door). It took nearly a week for the insurgents to finally be rounded up.

A few of them have since been taken into custody at the airport, which was trending on Twitter under #NoFlyList a few days ago.

And finally, when all was said and done, after realizing all the trouble he caused as well as the deep water he’s in, President Trump finally conceded defeat to Joe Biden.

Oh, now you’re conceding? Now? After two months of claiming election fraud was committed? After you suggested that you and your supporters march to the Capitol? After said supporters stormed the Capitol armed with flex cuffs and weapons, including an IED? And I love how you’re condemning those rioters now that your ass is on the line. SMDH. 🤬🤬🤬

As of today (Jan. 13, 2021), President Trump will be the first US President to face impeachment a second time. Another great achievement for the Trump Administration. *Sarcasm*

So what’s my thoughts on all of this? I’m ashamed. This whole thing is shameful on so many levels. The president’s irresponsibility, his unwillingness to hold himself accountable, the lax security surrounding the Capitol, the heinous actions the insurrectionists tried to carry out, the people that died, the obvious white privilege, all of it sickens me. Don’t dare come in my face talking about how Black Lives Matter looted during the summer, because 1) I didn’t support folks looting and destroying property either, because it made the whole movement look bad, and 2) looting a Target is entirely different than storming and looting the damn US Capitol. Don’t come in my face talking about “Blue Lives Matter” either, because you know what? I don’t wanna hear it. Those folks were cool with cops until one of them actually tried to do his job and stop them from doing their misdeeds.

Look at the United States now. I’ve never seen people so divided before. I’ve never seen folks blatantly threatening people to vote for their preferred candidate. The Capitol building being invaded by its own people seemed inconceivable until a week ago. So my question is this: is this what greatness looks like? Is this making America great again? Trump considers the previous administration to be a failure…but does he really believe that his administration is a success?

Trump’s second impeachment is well deserved. Only God knows what the outcome will be, but he should face the consequences of his bad behavior regardless, despite only having a few days left in office. Look at all the havoc he’s caused so far. All I know is that I’ve had enough of this foolishness. I don’t know what kind of president Joe Biden will be, but Donald Trump had his chance and he blew it. It’s time for him go. Speaking of which, I’m gonna go myself, because this post was basically a rant with receipts, and I’m tired.

Peace, y’all. Pray for us all.

If you agree or disagree, please let me know in the comments section. All I ask is that you be respectful (and yes, I did call the insurrectionists idiots, because their behavior was nothing short of idiotic). Disrespect will not be tolerated.

1 thought on “Is THIS Making America Great Again?”