Back when I first fell in love with Dwayne “The Rock” Johnson, I remember he always spoke of completing an acting project near and dear to his heart.  That project was playing the role of King Kamehameha, the Hawaiian monarch that united all the islands together in order to fortify themselves against their enemies.  Whenever Rock mentioned the King Kamehameha film, he would let it be known that bringing the movie to life was one of his greatest dreams, and not only would he do whatever it took to bring the dream to fruition, but he would make sure that when the project was released in the next few years, everything would fall perfectly into place.

Although multiple reports claim that Sony bought the rights to the film back in 2002 (others say it was Columbia Pictures), there’s online articles floating around that state the delay in production was due to Rock’s Samoan/African-American heritage.  Quiet as is kept, when I was training for my Hawaiian cruise ship job with the now-defunct NCL America line in 2007 (yeah, honey; I’ve had day jobs everywhere), one of the Hawaiian elders mentioned that production for the Kamehameha project was postponed because Rock didn’t properly ask their permission to play the beloved leader, not because of his race.  After seeing personally how much Rock was revered in Hawaii (Honolulu especially), and how the seriously the Hawaiian elders valued their culture, I believe the latter story.

Well, a decade and some change later, Rock must’ve been on his P’s and Q’s and came to the elders correct, because now his long-awaited King Kamehameha project, which is now officially known as The King, is effectively a go!  According to The Hollywood Reporter, director Robert Zemeckis (Back to the Future trilogy, Forrest Gump) will take the reins and screenwriter Randall Wallace (Braveheart, The Man in the Iron Mask) will be in charge of writing the film. 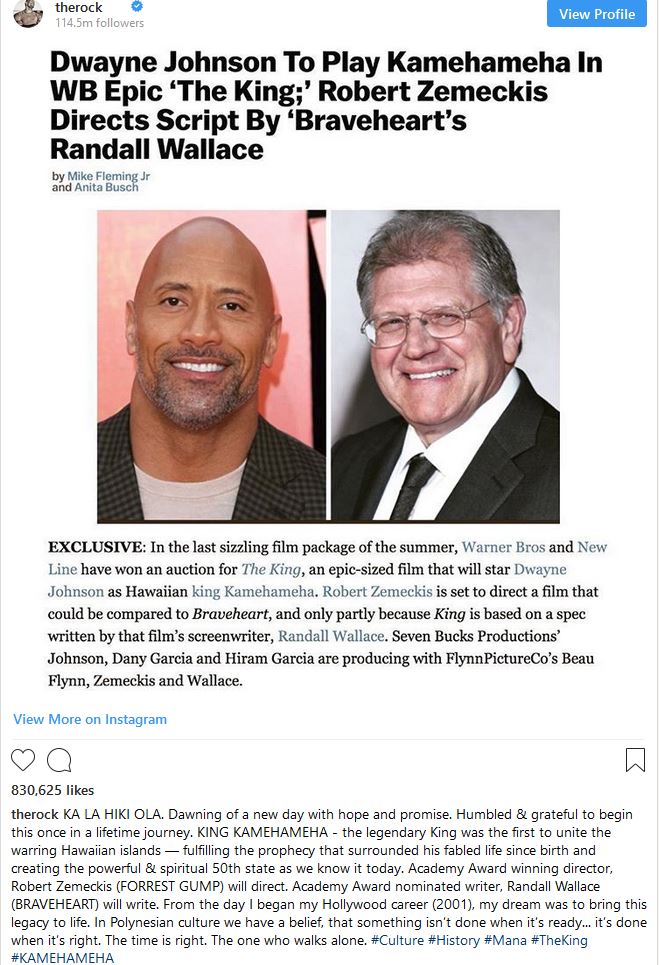 The Hollywood Reporter also stated that while in Hawaii last year, Rock, Wallace and his ex-wife/business partner Dany Garcia were personally blessed during a ceremony for the film by a Hawaiian priest known as a Kahu (which further strengthens my theory about the Hawaiian elders).

I personally can’t wait to see this movie, and I’m so happy that’s it’s finally coming to life.  Congrats to you, Rock!

So what do you think about Rock taking on the role of King Kamehameha?  Have you been waiting for him to start the project since the early to mid 2000’s like me, or is this the first time you’ve heard of it?  Is it a role Rock was born to play, or does his multi-racial ethnicity cause concern?  Do you believe the movie was postponed because Rock didn’t give the Hawaiian elders the proper respect by asking permission to shoot the film?  Give me your thoughts in the comments section!