What’s up, y’all?  As I mentioned in my previous post regarding Mo’Nique, one of the many reasons I didn’t boycott Netflix was because I refused to miss the second season of Jessica Jones (I don’t plan on missin’ Luke Cage, either).  So, when I learned the new season was set to air on March 8, I couldn’t wait to see it.  My mom and I practically watched it all in three days.  That being said, despite season two of Jessica Jones being interesting, it wasn’t without its flaws.

The current season has Jessica dealing with the fallout after killing the sociopathic Kilgrave and investigating IGH, the lab that experimented on her after her near-fatal car accident and provided her with superhuman abilities.  Malcolm is still working alongside Jessica as her “associate,” although he’s treated more like an annoying neighbor that’s a glutton for punishment.  Trish also gives Jessica a hand by using her celebrity status and connections, but deep down, she wishes she could do more; not only with Jessica’s case, but to help people in general.  Jeri Hogarth (who’ll always be Trinity to me—just sayin’) is still around, but Jessica isn’t on speaking terms with her after Hogarth caused her wife’s brutal murder by allowing Kilgrave to escape Jessica’s grasp…again.  However, Hogarth gets some life-altering news that could possibly soften her evil demeanor…or does it?  In the process of learning more about IGH, Jessica uncovers some seriously disturbing things about the company, as well as her past.

I can’t go any further without giving some major spoilers, but as I said before, this season just wasn’t as great as the first one.  The episodes started out strong, but they started to lose a bit of steam midway through.  The first season also had this issue, but the difference is, season one began to fizzle out around episode 11 or 12.  They may want to stick to just 10 episodes in the future.  Another thing that was interesting—and was also a detriment in a way—was that there was no clear villain.  Season one lets us know from the get-go that Kilgrave was the bad guy.  The dude was just evil incarnate, and he always managed to slip away from Jessica and/or stay two steps ahead of her.  That’s what made the show so intriguing.  This time around, the antagonists—and I use that term loosely—weren’t really bad.  On one hand, it was compelling to watch antagonists that weren’t malicious, as it’s very rarely seen in a series about a superhero.  On the other hand, with no real villain, the drama fades a bit, and the show loses its magnetism.  Hence, the reason some of the luster faded sometime around episode eight. 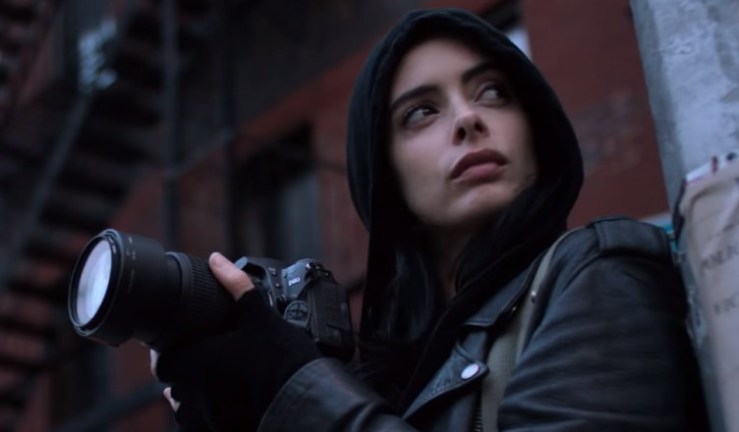 The only person that can be listed as an actual villain is newcomer Pryce Cheng, but Cheng is more of an aggravating nuisance than a real threat, which brings me to my other gripe about the new season.  The new men featured in this season of Jessica Jones are hella good looking, but I didn’t care for them as characters.  Pryce is a rival PI that wants to take out the competition by any means necessary, and the other newcomer is Oscar Arocho, Jessica’s new building super and eventual love interest.  As I said before, Cheng got on my nerves, and for the first half of the season, so did Oscar, as his attitude towards Jessica is just as shitty as Pryce’s when she first meets him.  When Oscar finally acts like he has some home training and Jessica falls for him, their scenes lack any serious chemistry.  This is no criticism against actors JR Ramirez and Terry Chen; their performances were good (besides, I always loved JR Ramirez as Julio in Power.  I’m still mad he got killed off the show!).  I just could’ve done without the characters themselves.  Worst of all, Luke doesn’t make a single appearance this season.  His absence was definitely missed. 😭😭

Jessica Jones’s second season wasn’t all bad.  Like I said previously, I did enjoy it.  There were a lot of cool action/fight scenes, and Jessica’s sarcastic humor always had me rollin’.  There was a scene where Pryce accuses her of murder and Jessica basically tells him that she didn’t “give a dead moose’s last shit” what he thought.  Classic.  The first few episodes had me on the edge of my seat, and the scenes that give the audience more insight into Jessica’s past were handled extremely well.  Trish and Malcolm have a story arc that’s very compelling, as does Hogarth.  I didn’t completely care for the way the season ended, but it definitely showed a pivotal change in the dynamic between Jessica, Trish, and Malcolm.  I for one can’t wait to see how this development is gonna play out next season, Lord willin’.

All in all, season two of Jessica Jones wasn’t completely explosive, but it wasn’t an absolute dud, either.  It was a lot like the less expensive fireworks we used to buy in the ’80s and early ’90s; they started off strong, but then ended with a wimpy little poof instead of a big bang.  Maybe season three will be the firework that’ll even make Katy Perry stare in wonder.