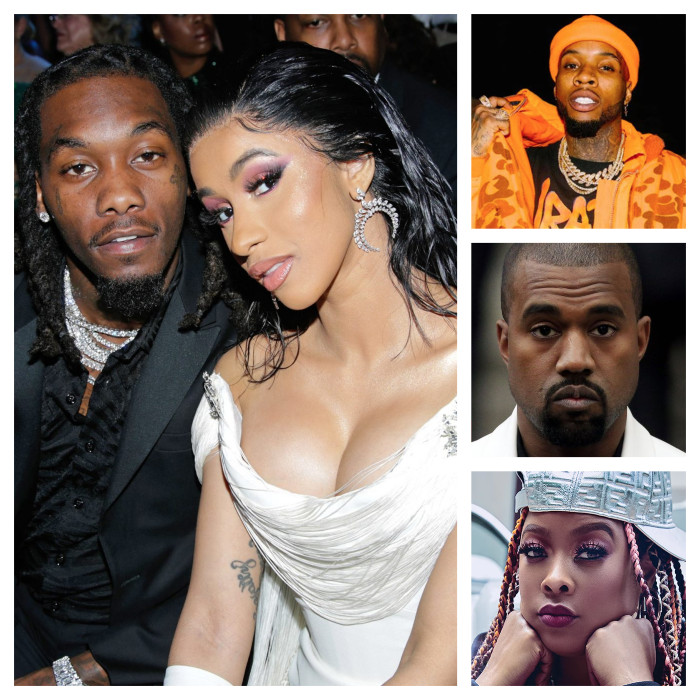 What’s up, y’all? September 2020 has proven to be quite an eventful month. It’s not quite as crazy as this past July, but with everything going on the world of Hip Hop, this past month certainly wasn’t boring. Let’s talk about it!

Cardi B and Offset Call It Quits

First, let’s start off with the Cardi tea. As I’m sure you’ve heard by now, after three years of marriage, Cardi B and Offset have decided to part ways. According to Lovelyti and other news outlets, the split had nothing to do with Offset cheating. Simply put, the couple just grew apart.

I also watched Empressive’s video regarding the subject, and she feels that although Cardi and Offset had a genuine falling out, Cardi may be using the divorce to further promote her music. Cardi’s since denied this, and I believe her. Cardi is a lot of things, but one thing I’ve noticed about her over the years is that she’s honest. She always lets her feelings be known and tells it like it is, straight with no chaser.

Naturally, everyone put their two cents in on social media. The haters hated, the Bardi Gang rode hard, and everyone else empathized with Cardi’s situation. However, one individual that irked me with her comments was politician/commentator DeAnna Lorraine. When the divorce was first announced, she tweeted the following:

Really ma’am? This woman’s marriage is ending and you’re kicking her when she’s down because you don’t like “WAP”? Shame on you. I can’t believe a politician would be this petty—oh, wait…

I wish Cardi well and I hope she, little Kulture, and Offset all get through this stressful time.

Kanye West is back in the news again. Two weeks ago, Kanye let it be known that he was waging war against the music industry to own his masters. As usual, he unleashed his fury on Twitter, and among the barrage of tweets concerning his issues with Universal Music Group, he also tweeted copies of his contract…the entire doggone document. I made sure to take screenshots of Yeezy’s tweets, and it’s a good thing I did; most of them have since been deleted.

And that was just a precious few of them. This man tweeted so much that Twitter actually blocked him for 12 hrs. (apparently Kanye doxxed someone that didn’t appreciate it):

Is the one time that Kanye showed his outrage against something and I actually get why he’s upset. Like Q-Tip once said, “Industry rule #4,080: Record company people are shady!” Over the years, numerous recording artists have come out and spoken out against record companies’ practices, including Prince, Michael Jackson, and Courtney Love. Eerily enough, after Prince and Michael finally gained ownership of their masters, they lost their lives. Whether or not there’s a true connection between their deaths and owning their intellectual property will probably forever remain a mystery.

There’s also infamous stories of artists and musicians not having two nickels to rub together despite being multi-platinum recording artists. Prime examples include New Edition, TLC, and Toni Braxton. Kanye’s war against Universal didn’t just start this year; he just made his grievances more publicized in 2020. He first initiated lawsuits against EMI and Roc-a-Fella records in January 2019, and according to Billboard, the suits are still in process. Lately, Kanye’s been making me hang my head in shame, but when it comes to this particular issue, I’m with him. Keep fighting the good fight, Ye.

I’m still not votin’ for ya, though.

As I mentioned in my “July 2020: The Month That Had No Chill” post, Megan Thee Stallion and Tory Lanez were involved in an incident that ended with Megan being shot in both her feet. It was believed that Tory was the shooter, and Meg later confirmed it during an Instagram Live broadcast on Aug. 20, 2020. However, Tory decided to fire back at Meg’s claims as most Hip Hop artists do…with an album.

Similar to LL Cool J’s 2000 GOAT album in a sense, all 17 songs from Tory Lanez’s Daystar target his accusers, discuss the incident with Megan, and declare that he’s innocent of all allegations. There’s even a song where he mentions, “How the fuck you get shot in your foot/don’t hit no bones or tendons/How the fuck your team is trying to pay me/in some whole millions?” Lanez received some backlash after releasing the album, and Megan herself responded to the Daystar project via Instagram:

Personally, I haven’t listened to Tory’s Daystar album yet, and I have no desire to. It’s true that there’s a lot of unanswered questions about what really happened that night, and the only people that truly know what went on in that SUV were the ones there at the time. However, I’ve seen the video of Megan exiting that car, and she was definitely wounded and leaving a trail of blood as she made her way down the street. I still say it’s very possible that she was shot, but I also have to agree with Empressive, who stated that Megan may have been grazed by bullets as opposed to being directly shot in both her feet. Either way, she was definitely assaulted, and thankfully her injuries weren’t worse than what she sustained.

As always, the truth will reveal itself in time.

Actress LisaRaye’s birthday just passed, and as a surprise, her co-panelists from her streaming TV show Cocktails With Queens decided to give her a treat: a special birthday shout-out from her little sister, Da Brat!

As it turns out, LisaRaye and Brat haven’t spoken over the past few months. Earlier this year, Brat publicly came out after revealing she was in a relationship with Jesseca Dupart, the CEO of Kaleidoscope Hair Products. Apparently, LisaRaye had to find out about her sister’s relationship via the blogs, instead of directly from Brat herself. Needless to say, LisaRaye didn’t appreciate that.

Upon seeing her sister on the show, LisaRaye’s emotions went from being tearfully emotional to seething anger. Once the other women tried to mediate the situation between LisaRaye and Brat, the former cussed them out without even breaking a sweat, leaving everyone in the panel speechless.

Then there were the folks that didn’t know LisaRaye and Da Brat were sisters (they really shouldn’t feel bad; I didn’t know they were siblings until 2005):

Frankly, I side with LisaRaye on this one (sorry, Brat. I still love you, girl!). I know what it’s like to not hear from family. I also know what it feels like to explain why I’m hurt and the people I’m speaking to not try to see my point of view. Sometimes I wish I had the gall to go off like LisaRaye did, to be honest. No, I take that back. I might end up losing friends and getting into physical altercations. Plus, LisaRaye went off via Zoom, not in person. That makes a difference. Either way, that drag was epic, and I ain’t mad.

Nicki Minaj Is a Mommy!

Last but not least, congratulations are in order for Nicki Minaj! While I was finishing up this post, I learned she just gave birth on Sept. 30!

The baby’s name and gender have yet to be revealed, but I’m sure the Barbs are on the case. Congrats again to Nicki! 👶🏽🎈

So what do you think about all the Hip Hop news that occurred last month? Was there anything I left out? Are you sorry that Cardi and Offset are breaking up, or do you believe it was a long time comin’? Do you stand with Kanye or do you think he’s just ranting and raving on social media for attention? Do you believe Tory Lanez’s story or Megan’s? Do you think LisaRaye’s blowup was justified or a bit too much? How psyched are you to find out whether Nicki had a boy or a girl? Let me know in the comments section!

1 thought on “September Is Chock Full of Hip Hop News!”

Leave a Reply to Wow! What a Week! – Insights from a Southern Girl Cancel reply